The world needed a better way to organize it’s life.

Only thing i knew was that life had been simpler before, easier to understand….  smaller.  And most of us liked it that way.

All that was about to change…. isn’t that how most stories start?

This story starts with an ending.

I had spent 10 years fulfilling a dream.  i had successfully built and operated 3 kickass restaurants/bars and i was pretty damn pleased with myself during the run.

Actually that’s not true, I was miserable most of the time, but it sure looked like I was having a blast.

Anyways, on to the beginning.  The ending started ending when the cancer treatment started ending, and the beginning of our new life looked like it had a shot at working out.  We didn’t have a long term outlook.  We didn’t have a plan.  We had a ‘put your head down, grit your teeth, and get through today’ approach that had gotten us out of the cancer, out of debt, out of partnerships with addicts and assholes, and out of the everyday shitty feeling like there’s something looming on your horizon about to kick you back down the hole you just crawled out of.

That was working great for us, but it was a far cry from where we started a decade before.

Optimism strapped itself on my back like a rocket pack, and i took off in exploration of a world where anything is possible if you just have the right pluck and determination, and the eye for people that dare to dream, to pick up along the way.

Some that I picked up were just as awkward with success as i, and as much as i tried to ease them into it, everyone’s first time is always weird, and scary, and gloriously exciting.  Enthusiasm makes up for so much when you’re playing with impossible outcomes, and sometimes even then it’s only worth it if you’re chasing something impossible.  The romantic in all of us is a sucker for staring at night skies, imagining that somewhere there must be someone as scared, as hopeful, and as tragically doomed to failure as themselves.

That romanticism saved my soul, as we negotiated booze addled poker nights of the industry’s most debaucherous card sharks, or cocktail soirees with ballerinas, champagne purveyors and wild mushroom foragers.  The people who were drawn to us, were the same romantics as us, believing beyond rationality (and probably influenced by a healthy appreciation for our wares), that the impossible was indeed possible.  We all hitched our wagons to each other as if to say, we’ll outnumber the bastards, and fuck em if they can’t take a joke.

I miss that place, a lot.   I miss the people far more… 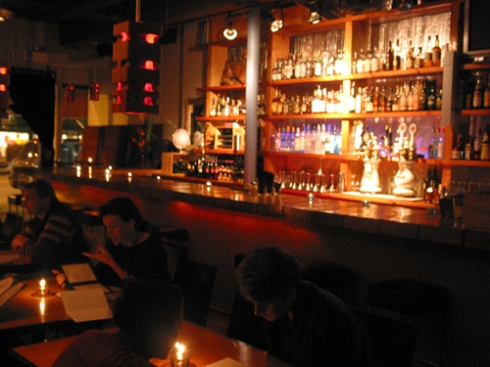 Serial entrepreneur and startup coach at www.startupathlete.com END_OF_DOCUMENT_TOKEN_TO_BE_REPLACED
This entry was posted on Wednesday, October 26th, 2011 at 05:16 and tagged with entrepreneur, Fiction Restaurant, Kitsilano, restaurant, Restaurateur, Sean Sherwood, Tech founder and posted in philosophy, Restaurants, Startup Athlete. You can follow any responses to this entry through the RSS 2.0 feed.
Optimism begets more optimism… »

One response to “The idea started simply…”